Welcome back to the “UICollectionView Custom Layouts: the Ultimate Tutorial” series. This is Part 2, where we will actually tackle the custom layout part.
If you haven’t seen or done the first part, I strongly recommend you to take a look at it, as we will be using the UICollectionView we created there.

Remember what we had at the end of Part 1, when we run the project without the custom layout, and what we would like to achieve? 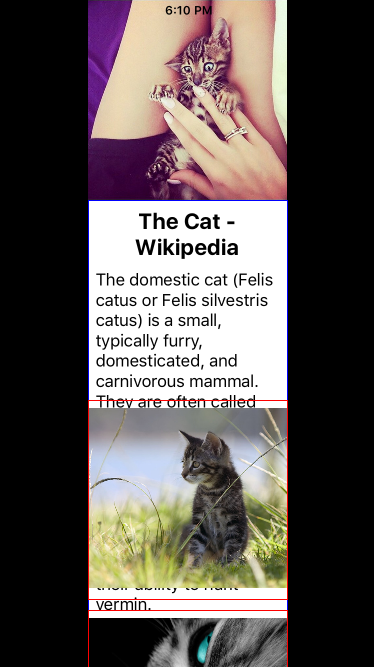 A few words before we start:

First, we need to add a bit of code in the TextCell class, as this cell will need to get resized. Simply paste the following code in TextCell.swift

Let’s add a simpler version of it in the ItemCell class:

This part of the code enables the Layout to calculate the new size of the cell, matching its content.

You don’t need similar code for ImageCell because its size is fixed, set in the custom layout and not re-calculated.

And now, take a deep breath, we will create the long-awaited custom layout!

Also, don’t forget to add the class in the Collection View attributes in the Storyboard. Select “Custom” and type “CustomCollectionViewLayout” in the class field. Obvious, but oh so easy to forget ;)

Now, let’s tackle the heart of the custom layout:

The first function to create is prepareLayout, which, as its name states, prepares the layout.

“Tells the layout object to update the current layout.
Layout updates occur the first time the collection view presents its content and whenever the layout is invalidated explicitly or implicitly because of a change to the view. During each layout update, the collection view calls this method first to give your layout object a chance to prepare for the upcoming layout operation.
The default implementation of this method does nothing. Subclasses can override it and use it to set up data structures or perform any initial computations needed to perform the layout later.”

In this function, we will loop over the sections and items to get the actual size of each element, and to keep track of the height of the content.
And as we would like to have a code as elegant as possible, we will do the size calculation in a separate function, called frameForItemAtIndexPath.

Then, we will make sure that the UICollectionView has the right size:

Two more thing and we’re done! Now that we have calculated the size of the cells and that we know the size of the UICollectionView, we can determine the attributes, ie what will appear on screen in a rect or at a certain indexPath:

I hope this tutorial series helped a bit. As I said at the beginning, I tried to cover different cell configurations to give you the tools to start experimenting with custom layouts, now it’s up to you to go further! And, who knows, maybe Apple will soon release something to help us deal (easily) with variable height in UICollectionViewCells like they did for UITableView…

All the code for this tutorial is available on GitHub: SCCollectionViewCustomLayout. As usual, don’t hesitate to fork it and play with it! Also, there is a little bonus: I’ve included a dynamic HeaderView in the UICollectionView and Custom Layout :) You’re welcome!

If you have read that far, thank you! Really! I know it has been long, but you won’t go unrewarded, I have some extra tips to share with you :)